I received an E-Mail from a modeler over at theRPF that "a modest sized, (about 8" in length or so) buildup of the shuttle from GQ" has been commissioned. This model, as explained, will look just like it did on the planet after landing. So it will have the burn marks on it and it will be in the "Landing Position" 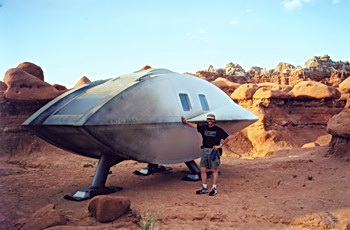 I'm excited and can't wait to see it! Pictures will be available as soon as the test models are finished. And if I get any more information, i'll be sure to let you guy's know first! Perhaps the suns of Warvan are shining upon us! 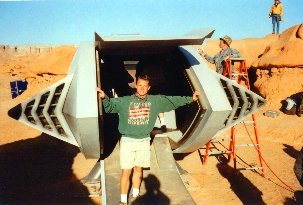 I've updated the Fun Stuff Page to include the paper models of the Protector, and the Shuttle Craft. These models really do look nice and I enjoyed building them. While the Protector Paper model isn’t the Pegasus Hobbies Model, it has good quality, and it looks like they used actual pictures from the movie to make it.

On the Page I also included a link to a FAQ section from one of the paper model websites that gives some great pointers for making the most out of you Paper Craft models. Here in a bit I will also be adding some more links and Fun Stuff to that page.

A few days ago I decided it would be a great idea to start arranging Galaxy Quest information. The problem is there are a variety of sources that contradict themselves at times. These sources are as follows;

- Magazines and other 'Second Hand' Sources.

I've decided to judge these items in what I call a "Cannon Creditability" [CC]. When you take Information from a source, it has certain credibility. All Information has to be accurate to the Movie First and Foremost. No Exceptions. This allows us to take information from the novelizations, comic books, documentaries, posters and ect. with out having continuity errors. (Rating Scale 1-5; 5 being most creditable) Level 5 objects can not be discredited.

NOTE: A Low number Doesn't mean it's a bad source, it just shows a bit of distance between the source materials.

When you read the books, comics, or watch the 20th anniversary, a person may give extra details that were not in the movie. We accept these sources as true fact, only if they align with the movie, and easily fit in the storyline, and Galaxy Quest Universe.

2 years ago I created this website so I could help distribute information, photographs, and other resources that i've spent a long, Long, LONG time collecting from auction sites and scouring the web. I've found a lot of cool stuff, but I haven’t put much of it up yet. This seems to be a part of the site i need to work on in the future.

If you believe that one of the CCN's need to change, let me know. I'm open to suggestions.

As we head to the second half of the year, I look to the past and see all of the great things that have happened. I also look to the future. There are so many possibilities as to what can happen. I know there are people who love this movie, but they aren’t “Avid Fans” they just enjoy watching the movie once or twice a year. We need to find these people and get the word out to them. Get them excited about it! Let them know about the models and comic books! Let’s make some noise!

Never give up. Never Surrender.

Well, Nothing New... No News as to what's going on... no next movie, no new props news... i'm just hanging around still.

Holy cow... I just realized this year's almost over... it's almost 11 Years. Oh how the time goes by.

Today I stoped by RadioSchak and bought some interior parts for my Nebulizer and I hope to get it started sometime soon, i also got my Plasma disk in the mail on wednesday, so I just need to do some work on both items and I hope i'll be able to get them done.

Today I started work on my GQ uniform ( V.3 issued by the thermians)

I got a basic pattern started and plan on uploading pictures of my progress as i go.

This became a flop soon afterwards, but as of right now I've revamped the project with some fresh ideas and free time. With some new perspective, I think I’ll be able to create some uniforms for myself and some of those elusive uniform patterns people have been looking for. Look for updates HERE!

Well it's june and I have made little progress. Today I ordered a Pocket Plasma Disk of the internet, but they are on Backorder. Who knows when I'll get it in. I'v started thinking about all of these kits and the uniform I'm wanting to make.... and i figured I have set my self to a due date. Aug. 2-8 For the Gen Con in Indy. I just hope I can do it. I have limited recources when it comes to projects. mostly when it comes to the ca$h and knowing what i am supposed to do with my kits.

I haven't but thay have.

Some friends at the dedicated RPF have already assembled their ships and boy are they nice looking you can see them here @ http://www.therpf.com/showthread.php?t=78176