There is a Galaxy Quest Documentary coming soon! It'll be in a regal movie studio near you!

Galaxy Quest my once again be comming to the small screen in our homes! For over a year we've been waiting on the edge of our seats for hope that the Quest will go on and according to The Hollywood Reporter and Slashfilm it will go on!

"We know from our own sources that Amazon and Paramount Pictures are hoping to get Tim Allen, Sigourney Weaver, Tony Shalhoub, Sam Rockwell and Daryl Mitchell to reprise their roles. But the series won’t entirely focus on the original crew of the NSEA Protector. The series will take a cue from the Star Trek reboot franchise and will also feature a younger crew as part of a reboot of the original Galaxy Quest series."

This in addition to the board game that has been talked about is really pointing to some interesting possibilities for the Galaxy Quest Fanbase!

It seems like we may have a board game comming soon! You can wach the podcast talk about it in this short podcast.

If you guys havent checked out "The Galaxy Quest Restoration Project" you should. these fans are quite funny and have done a great job with these podcasts. Check them out at http://galaxyquest.tv/

"The show disappeared into oblivion whilst fans campaigned to have the show resumed, it failed to have any effect. Fast forward to 2012 and an old studio basement in uptown L.A. the original video tapes of the shows where found - the only ones known to be in existence. These tapes however had become damaged and Fictionshed's Mike Morley handed to media restoration expert, James Johnson of Johnson's Media Factory of Avon Lake Ohio. This is where the Galaxy Quest Restoration Project began...

I got some Loot Crate patches from Ebay, these are closer to the original in size than the other non-licensed patches, but still not quite accurate. The color on the originals is a grey-silverish instead of a white color, and has a higher quality stiching. Even with those minor faults it is still a licensed item. 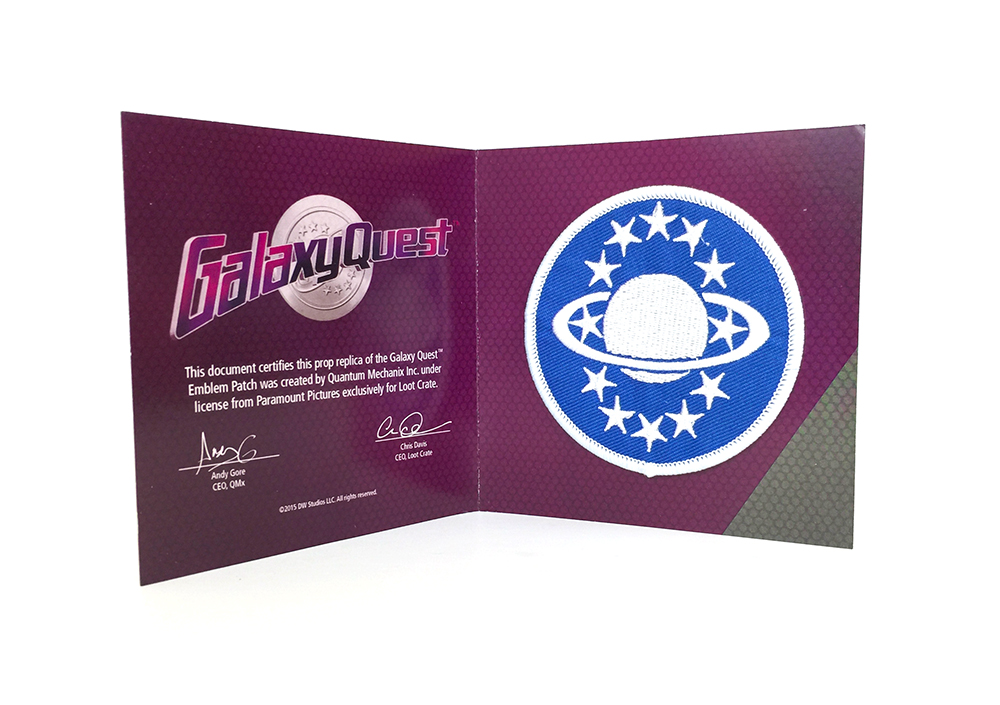 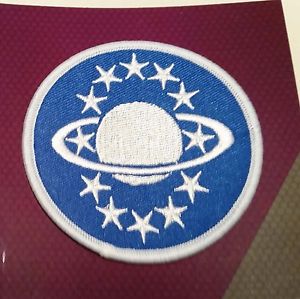 I hope your personal lives have been going well. I know it’s been a bit rough the past few months with the passing of Leonard Nimoy and Alan Rickman.

On a brighter note:

I’m sure most of you are also Star Trek fans and are excited with the idea of the new Star Trek TV show that has been announced by CBS just in time for the shows 50th anniversary!

I’ve considered doing more frequent updates not concerning Galaxy Quest specifically but upholding the spirit of it. Feel free to send me a message, if you are a member, or consider joining! It’s free and easy just follow the link under Computer Access.

I really enjoy the conversations I’ve had with some of you!

Here in the next week or so I’ll post some pictures I took while at the Indianapolis Comic Con.

This out-of-the-blue announcement came yesterday from multiple sources, and we've seemed to track all their sourcing back to an article on variety. 'Galaxy Quest' TV Series in the Works All the articles break down some general history of the 1999 movie. At this time no official statement from Paramount has been made.

As always we will update with further information when we can.

According to ScienceFiction.com there will be a new comic book series based upon Galaxy Quest once again!! This will be our chance to once again show our support for Galaxy Quest!!

If you take a look at IDW's official site you can see that they have the first comic book cover listed, while a quick internet search will show other covers, both alternate and a sequel (as there will be four in this series) The plot of this story line is supposed to pick up at the end of the 1999 movie Galaxy Quest, and I'm not sure if it will tie in with the 2008-2009 comic book series at this point or not. What we do know is that this will be a comic that will address the 13 second time jump, and any consequences that happened when the omega 13 was activated near the end of the film.

It does appear like an alien race has been affected because of this, and they have- through some currently unknown means- tracked down those responsible for the 13 second time glitch to try and rectify any problems caused.


An online comic shop known as Westfield Comics, shows another cover which goes to the second of the 4 comics expected to be released (Galaxy Quest The Journey Continues #2) Leave me a message below with any questions and we will have our people try and get those answered as quickly as possible!

Indiana is long overdue for a comic convention but have no fear- this weekend March 14-16 the Indianapolis Convention Center will be hosting one! With this being the first comic con in Indy, it's hard to know exactly what is going to happen, But regardless I'm thrilled and excited especially after attending last year's GenCon.

The guests will include Maisie Williams, who played Arya Stark in Game of Thrones on HBO, Caity Lotz, who played in Arrow, Mad Men, and MTV's Death Valley and Evan Peters, who is known for his role in Kick-Ass.

In addition, May 30th-June 1st will be Indianans first PopCon! This will feature everything from Sci-Fi and Fantasy to Cosplay and Comics with movies, music, and more.

For more information on both of these events, visit the links below!

The Indiana Comic Con is a comic book convention located in Indianapolis, Indiana. The Indiana Comic Con is Indianapolis' largest, true comic con. As long-time comic book fans, the promoters behind the Tampa Bay Comic Con, Orlando Comic Expo and Nashville Comic Expo, we wanted to bring a similarly-styled comic con to the great state of Indiana! The convention has exhibitors that cater to a wide-spectrum of interests including comic books, magazines, toys, games, Star Wars, Star Trek, anime, manga, cosplay, artwork, sketches and apparel. In addition, a roster of comic industry professionals and comicdom-related celebrities are in attendance for attendees to meet and greet. As admission is kept reasonable for adults and FREE for children, the Indiana Comic Con is a family-friendly convention.

Indy PopCon is a popular culture convention that will be coming to downtown Indianapolis in late May of 2014. Formed by a group of (mostly) Hoosiers with over 50 years of con experience, PopCon was created to give the Midwest a new kind of convention. Many popular conventions are hyper-focused and specific to certain genres. To get the most out of those conventions, you are likely already embedded within those specific cultures.

We’re a little bit different. Our goals for Indy PopCon are two-fold:

1. Make a Convention Accessible to All

Rather than specialize in one form of pop culture or another, we are dedicating resources to bringing in all aspects of popular culture. Our hope is that those who attend for one or two of our themes will discover new geeky, nerdy, and interesting hobbies and fun that they otherwise may not have been exposed to.

2. Make a Convention About YOU!

The landscape of popular culture is changing. Previously, one would need to be discovered in order to make a career in comics, art, entertainment, movies, and gaming. But with the success of funding platforms like Kickstarter and self-publishing platforms like YouTube, you are in control. You can choose what you want to publish, and what you like. You have the power to shape our popular culture!

We will invite the trail-blazers of this new pop culture phenomenon. YouTube stars, podcasters, web comic artists, webmasters, and more will be invited to share and grow their craft and also to help guide and train the next generation. Panels and workshops will be made available for those who have a dream and the passion to create, but just need a little guidance. Our hope is that Indy PopCon 2015 will feature new internet superstars who attended PopCon 2014!

We hope that you will choose to join us for our first PopCon. We won’t disappoint you!